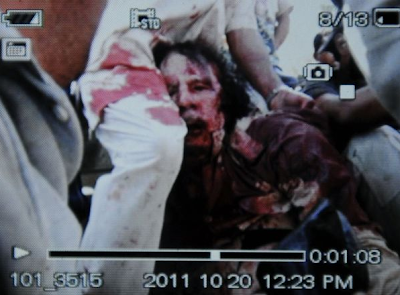 According to the National Transitional Council, he succumbed to gunshot wounds in his head and his legs. After his capture he was removed with an ambulance in critical condition.

Gaddafi tried to flee Sirte in a convoy. Thursday the city fell into the hands of the new rulers. NATO shot Gaddafi's convoy. The imprisonment of the former dictator was confirmed by the military top official Abdelmajid of the National Transitional Council, NTC, has taken over Libya on Thursday.


A soldier of the Transitional Council, who witnessed the arrest of Gaddafi, said he had hidden in an underground shelter and shouted: "Do not shoot, do not shoot!"

Gaddafi had ruled Libya for about 42 years. He always said that he was not going to be captured alive by the new rulers. Gaddafi is wanted by the International Criminal Court in The Hague.

It has been said that the Libyan people took the streets to celebrate this..

Global elite will place their own person in power, like it happened with Egypt. They are so screwed.