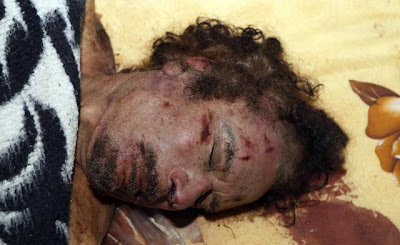 Muammar Gaddafi’s autopsy was carried out at a morgue in the city of Misrata, about 200 km (130 miles) east of Tripoli. (Photo by Reuters)
Libyan forensic doctors carried out an autopsy overnight on the body of Muammar Gaddafi, the former Libyan leader killed last week, one of the people involved in the autopsy told Reuters on Sunday.

“We worked all through the night. We just got done,” said the source, who spoke on condition of anonymity. He did not reveal any of the autopsy’s findings.

The autopsy was carried out at a morgue in the city of Misrata, about 200 km (130 miles) east of Tripoli. Local officials said Gaddafi’s body would now be brought back to the cold store at an old market in Misrata where it has been on public display.

Military commanders in Misrata said on Saturday that no autopsy would be carried out on the body despite concerns over how he died.

As the rigid, bloodied, yellow corpses of Gaddafi and his son Mutassim lay on dirty mattresses on the metal floor of the glacial makeshift mortuary, hundreds of Libyans were allowed inside to view them.

A man identifying himself as Sadiq said he was only 18 when the former dictator took power in 1969.

“All my adult life I lived with this low life, this...” said the 60-year-old, who declined to give his last name, spattering curses against Gaddafi.

“But he is dead and I am happy,” he said, laughing.

Russian Foreign Minister Sergei Lavrov said the “way his death happened poses an entire number of questions,” and called for a probe.

U.N. human rights chief Navi Pillay also called for an investigation, as did Claudio Cordone, senior director at Amnesty International, who said that if Gaddafi "was killed after his capture, it would constitute a war crime and those responsible should be brought to justice."

Libya’s wanted former intelligence chief Abdullah al-Senussi, meanwhile, surfaced in neighboring Niger after apparently fleeing through the desert following the fall of the oasis town of Bani Walid on Monday in the penultimate battle of the conflict.

“The presence of Abdullah al-Senussi has been indicated in the far north of Niger,” near the Libyan border, a government source in the capital Niamey told AFP on Saturday.

Senussi is wanted by the International Criminal Court on charges of “crimes against humanity.” The court leveled the same charges against Gaddafi and his son and longtime heir apparent Saif al-Islam.

Saif al-Islam too remains at large. NTC officials said that he too may have fled to Niger.

NTC leaders are adamant he was shot in the head when he was caught “in crossfire” between his supporters and new regime fighters soon after his capture.

Interim prime minister Mahmud Jibril told the BBC’s Hardtalk program that he would rather Gaddafi had survived.

“To be honest with you at the personal level I wish he was alive. I want to know why he did this to the Libyan people,” he said. “I wish I were his prosecutor in his trial.”

Jibril added that it would be “absolutely OK” to carry out a full investigation under international supervision into the killing, as long as Islamic burial rules were respected.

Interim leader Mustafa Abdel Jalil said an investigation was being conducted into the circumstances of Gaddafi’s killing after several foreign governments and human rights watchdogs posed questions. Abdel Jibril said that they are dealing with the subject with transparency.


To be honest with you at the personal level I wish he was alive. I want to know why he did this to the Libyan people
Interim prime minister Mahmud Jibril

On Sunday, the Libya’s new leaders will declare liberation paving the way for the formation of an interim government followed by the first free vote in 42 years.

The long-awaited declaration was being overshadowed, however, by raging controversy over the circumstances of Gaddafi’s killing after he was captured alive during the fall of his hometown Sirte on Thursday.

The NTC officials said the declaration would be made in the eastern city of Benghazi, cradle of the revolt, inspired by uprisings in Tunisia and Egypt that began in February and, backed later by a NATO air war, saw Tripoli overrun in August. The NTC had promised to proclaim the country’s liberation once Sirte, Gaddafi’s last bastion of support, had fallen.

Under the NTC’s roadmap, an interim government would be formed within one month of the declaration, followed within eight months by elections for a constitutional assembly ̶ the first democratic vote in Libya since Gaddafi seized power in a coup 42 years ago.

Parliamentary and presidential elections would be held within a year.
-

This is how media works, we only see the opponents of Gaddafi talk, nowhere in the media have i seen a PRO-Gaddafi person speak..