"The Anti-Counterfeiting Trade Agreement (ACTA) is a proposed plurilateral agreement for the purpose of establishing international standards on intellectual property rights enforcement.[1] It would establish an international legal framework for countries to join voluntarily,[2] and would create a governing body outside international institutions such as the World Trade Organization (WTO), the World Intellectual Property Organization (WIPO) or the United Nations.[1][3] Negotiating countries have described it as a response "to the increase in global trade of counterfeit goods and pirated copyright protected works."[2] The scope of ACTA includes counterfeit goods, generic medicines and copyright infringement on the Internet.[4] Groups such as the Electronic Frontier Foundation (EFF) oppose ACTA,[5] stating that civil society groups and developing countries were excluded from discussion during ACTA's development in an example of policy laundering.[6]

Opponents have argued that the treaty will restrict fundamental civil and digital rights, including the freedom of expression and communication privacy.[7] "The bulk of the WTO's 153 members" have raised concerns that treaty could distort trade and goes beyond the existing Agreement on Trade-Related Aspects of Intellectual Property Rights.[8] Opponents also criticize ACTA's removal of "legal safeguards that protect Internet Service Providers from liability for the actions of their subscribers" in effect giving ISPs no option but to comply with privacy invasions.[9] According to an analysis by the Free Software Foundation, ACTA would require that existing ISPs no longer host free software that can access copyrighted media, and DRM protected media would not be legally playable with free software.[10]

Canada, the European Union and Switzerland joined the preliminary talks throughout 2006 and 2007. Official negotiations began in June 2008, with Australia, Mexico, Morocco, New Zealand, the Republic of Korea and Singapore joining the talks. The negotiations were classified as secret in the US on the grounds of "damage to the national security".[citation needed] Apart from the participating governments, an advisory committee of large US-based multinational corporations was consulted on the content of the draft treaty,[11] including the International Intellectual Property Alliance,[12] (which includes the Business Software Alliance, Motion Picture Association of America, and Recording Industry Association of America)[13] and Pharmaceutical Research and Manufacturers of America.[14] The treaty calls for the creation of an "ACTA committee" to make amendments, for which public or judicial review are not required. Industry representatives may have "consultatory input" to amendments.[15] A 2009 Freedom of Information request showed that the following companies also received copies of the draft under a nondisclosure agreement: Google, eBay, Intel, Dell, News Corporation, Sony Pictures, Time Warner, and Verizon.[16]

After a series of draft text leaks in 2008, 2009 and 2010, the negotiating parties published an official version of the then current draft on 20 April 2010.[17] In June 2010, a conference at the Washington College of Law with "over 90 academics, practitioners and public interest organizations from six continents"[18] concluded "that the terms of the publicly released draft of ACTA threaten numerous public interests, including every concern specifically disclaimed by negotiators." A group of 75+ law professors signed a letter to President Obama demanding that ACTA be halted and changed.[19]

The final text was released on 15 November 2010,[20] with English, French, and Spanish published on April 15, 2011.[21] A signing ceremony was held on 1 October 2011 in Tokyo, with the United States, Australia, Canada, Japan, Morocco, New Zealand, Singapore, and South Korea signing the treaty. The European Union, Mexico, and Switzerland attended but did not sign, professing support and saying they will do so in the future.[22][23] Article 39 of ACTA states countries can sign the treaty until 31 March 2013. European Parliament reportedly has the final decision over whether the treaty is dismissed or enacted.[24]

Poland announced on January 19 that it will sign the treaty on January 26, 2012.[25] According to Polskie Radio, Polish Wikipedia is considering a blackout to protest the signing, similar to the English Wikipedia blackout that had occurred to raise awareness about the Stop Online Piracy Act on January 18.[26] A number of Polish government websites, including that of the President and Polish Parliament, were shut down by denial of service attacks that started January 21, akin to protests against SOPA and PIPA that had happened two days previous.[27][28]"

Read more on this on Wikipedia

A CALL FOR FREEDOM; 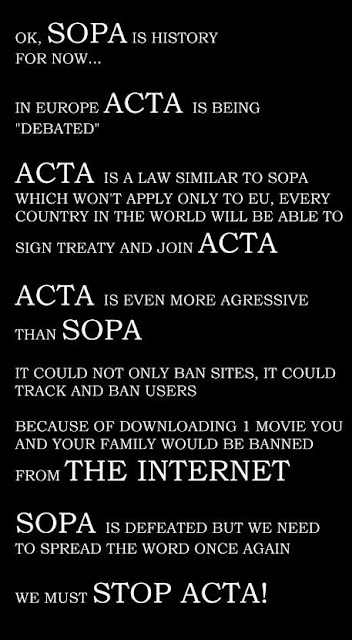