On January 7th 2012 Ivy Blue Carter was born, (Blue/masonic lodge color, IVY Illuminati's Very Youngest) the daughter of singer Beyoncé and rapper Jay-Z. On this blog i have been exposing her parents (Beyoncé and Jay-Z) as devil-worshippers (industry-puppets), but it get's a little twist..
They named their daughter Ivy Blue, turn it backwards and you get Eulb Yvi which is Latin for Lucifer's Daughter? 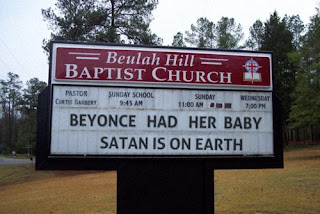 It is very well possible, Beelzebub is also a Latin name for (a) Lucifer/demon, and phonetically Eulb sounds like Beelzebub.


I will research a little more into it and let the facts be known.
Geplaatst door veritas aequitas op 19:54